No DEAL DAMN IT!

Stak attack has a few words! My words are even more, brief! Watch the end of the video with that 11 year old kid! UGH!!!

Islam belongs in the trash!


Fun guys, Iran’s mullahs. Unless you’re an Iranian woman. Or a female mannequin.
Posted by dcat at 9:23 PM 2 comments:

A Wake up Call

Hopefully for the insurgence abroad and here at home! 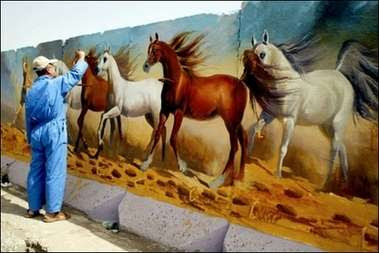 A work of art in Iraq

So now what will the democrats = Democraps say for themselves over this! Still wanna cut and run I presume!?!

The wild Democrats will be ridden by the Al-Qaeda if they don’t wake up soon!!!

And something more to look at Gateway Pundit

News from the UK

Unlike congress I'm proud of them, I support them, and I love them all!

You would think the Democrats would get the whole picture!? Obviously they don’t! Too damn bullheaded to admit the truth! Do they just want to have power and do exactly what the Republicans have been accomplishing all this time in office, ‘only to turn around and call it “their idea”? What is it with these idiots!?

Well you know we have freedom of speech. We have a very good country here and I hope that people will not just hand it over to extremist thugs! Yes I moderate my place because of the thugs that loom! I have that freedom here because it is my place and I will either let you into my home or slam the door in your face! That is my right! Look at what is happening to a blog in Egypt called Sandmonkey! The thugs are there! He, maybe fearing for his life now!!!

Are you a humanitarian? Only if you care about "all the people" and their freedom! Other wise you are noting more then a hypocrite that wants to protect terrorists! AND YOU WILL LOSE! Because, the polls are actually wrong! They really have only 51% out of millions and millions of people that disagree! So ya all can stuff those polls up where, the sun don’t shine honey!

At Iraq the model they are asking the big questions of Democrats. Make sure to take a look at the comment section. The ones that appose and stick up for the Democraps are the Islamic terrorist supporters of Al-Qaeda! That should make you open your eyes! Or are you going to be just like most of the Germans during WWll saying: “oh this isn’t happening here!” Some are still in denial to this day! Never mind people disappearing off the streets in some countries!!! It just may happen here folks so WAKE THE HELL UP!

So sorry to hear of Sandmonkey calling it quits because of the thugs in Egypt!

Here is another clip for you liberals out there! Hat tip bg! Copy and past this into your browser to view.

Majority of World Public Says US Influence is Mainly Negative (That is the word of world public) http://www.worldpublicopinion.org/ Go and give Melinda Brouwer hell all you Republicans!
Posted by dcat at 11:34 AM No comments:

More of Us Should Show Signs! 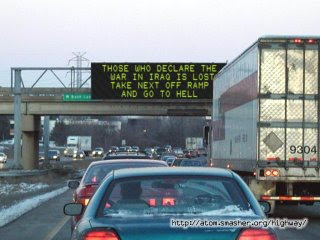 It looks like the picture was taken in the Mid West! I see snow on the ground. I knew it couldn't be here in La la - la la Washington! :D

For folks like Tom C with poor eyes it reads:

THOSE WHO DECLARE THE WAR IN IRAQ IS LOST TAKE NEXT OFF RAMP AND GO TO HELL!

It’s The Imam That Deserves to Die!

I want her to live and be heard!

Then the good stuff...

And the finally of my day! Oh don’t you just love the chickens in the back ground!?
Posted by dcat at 10:03 PM 2 comments:

You threaten me and I will act! Even if it means my life! There are worse things in life then death. It is to live without freedom! You might as well be dead!

Here there be, monsters! So it’s best to be prepared.

It looks like Islam is getting to the point of being brutal to folks that speak out against the Koran. They do it in a bullying and childishly deadly, manner. They are showing us here in the Western world, that it must be all true! Actions speak the loudest or don’t they know that? Maybe they were absent that day in class. Just like Reid must have been, because he doesn’t have a clue!!! If we pull out of Iraq does he have the slightest idea of what will happen here? His short sightedness just as others like him will be the death of USA!

I am thankful for Robert Spencer at Jihad Watch. With talking and showing all the intimidation going on across the west!

Nicely done with the research Robert! And I will post it here at my place too!

So tell your children that ‘there be, monsters here! Not to frighten but to prepare and be ready to act if need be! You may want to do the same if you want to survive the same way our forefathers did. Oh but don't give your guns to the Goverment just yet folks!
Posted by dcat at 9:19 PM 2 comments:

CNN doesn’t show anything good about Iraq so stop wasting your time!

Why would, CNN cast anything worth hearing. All CNN is capable of doing is starting fires. I am comparing CNN and followers of this news cast, with terrorists! Calling our president incoherent!? Name calling again by the loons! The support from CNN on this matter is appalling!

I’m proud of our soldiers and what they are accomplishing in Iraq. No we shouldn’t pull out! The left are definitely not humanitarians because they don’t care about others! If they did care they would be supportive. Yes folks it’s all about them! Shame, shame, shame to all the cut and run!

...And for PBS You ain't off the hook! Now for a word from our moderate Muslims: It seems I'm not the only one with an attitude! There is always MEMRI TV if PBS Won’t post anything!

You got that right Michelle Malkin!
Posted by dcat at 5:54 PM 7 comments:

It seems I'm not the only one with an attitude! This MEMRI TV was very interesting! Nice to see, the spit fire in this woman newscast person.

I loved it when she put her male opponent in his place. I thought I was watching FOX news at that point. I had to keep hitting the pause button to read it all and get the expressions. Good to see the hope and the change of all the brainwashed women! That goes for even in the USA! That they will come out of the closet and fight back! BIG TIME!

Who in the hell do these guys think they are anyway!? What you think you’ll get it for free!? Think again bubo! I can hear it now after a rape case! Off with his testicals! And the liberals, out there protesting cruelty on behalf of the rapist!

Then there is this beauty, yes even a Hot Air take. Then this little tidbit on Jihad Watch!

It would be nice to back all the bullies into one little corner and then make them all squirm!

I sure would enjoy it!

Oh and liberals We really do need to stay and help in Iraq! Show me that you really are humanitarians instead of hypocrites!
Posted by dcat at 9:23 PM No comments:

A little technical glitching in the first few seconds, but it doesn’t get in the way. The video is by Bob Parks, who has had his own run-ins with YouTube and liberal tolerance for conservatism. This particular clip went up in February and has had over 224,000 views. In it, Parks takes on the Defeatocrats and thanks our troops for their service. Good stuff.

"HE HAS RISEN!" Happy Easter! 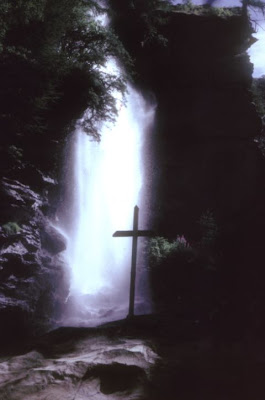 No fury like a mother scorned! People like Hanoi Jane have no idea! Hat tip to bg

There Ain’t Gonna Be A Rag On MY Head!

Click here to see what is in store for the 72 Virgins !

And now a word from our Soldiers: *click here*
Take that Hollywonks full of liberal jackasses!!!
Posted by dcat at 12:06 PM 5 comments: