Obama was told by Soldiers Family! Isn’t that ENOUGH!

You would think so wouldn't you!

I was just about to step out the door for a nice fall day walk with hubby and the dog and we just had to put this one on before leaving! WHAT AN ASS OBLABLA IS!!! Talks to thugs and keeps on going!

For those of you women out there scared thinking that abortion rights will be taken! Hey soon you won’t have any rights when your good ole boy liberal oblabla sells out our country! Don't those ladies look nice!? Look at the way they dress for their men! Oh and they also got to get out of their houses just for this: Talks to thugs!

And you dumb asses here in the USA are so fucking scared of rape but you coddle rapists and other thugs behind bars! I DON’T GET YOUR PATHETIC BACK ASS VIEWS! YOU ALL are NUTS!

Listen to the soldiers that were there.

YEAH THE VIDEO SAID IT ALL!

Fire anyone that has cancer is that it demi’s?

Sen. Claire McCaskill, D-Mo., a surrogate for the campaign of Sen. Barack Obama, D-Ill., raised the age and health of Sen. John McCain, R-Ariz., when discussing the qualifications, or lack thereof, of Alaska Gov. Sarah Palin. Thank you to Gateway Pundit for bringing this to everyone’s attention!


Oh and CNN if you are talking about keeping Palin honest? Oh please and I see enough about the Ill. Senator with Hamas donations and dishonesty running rampant in Chicago! Hey you tube talk about that one too why don’t ya!

Since when does CNN put up flags to the videos that we post at Republican sites? WHY TO SMEAR OF COURSE!

As I was saying a new LOW for the LEFTARDS! See what they do everybody! And they pay you tube to pull all of ours that we want to post! Let’s work on the internet staying HONEST SHALL WE!

Look I have had enough of your crap liptards! You can’t find, not one thing negative about McCain so you start on his age and health! Have you thought that maybe you, can even drop dead tomorrow!? McCain may even out live the one with the biggest mouth squealing about his health and short life span! You can’t judge that you liptards!

There you have it people and comments made from the democrats are only going to sink them to an even more staggering low! They never had any respect from me I am proud to say! I hope that the rest of the country sees these loony left for what they are!

The reason why I moderate is because of these people that attack bloggers because they don't have anything better to do especially the AQ still hiding in caves till Obama is elected!

“This is my freedom to post”. Yours is not to come here if you don’t agree! THEN LEAVE! I don't care to hear what you have to spew!
Posted by dcat at 4:53 PM 3 comments:

A message from Sarah Palin 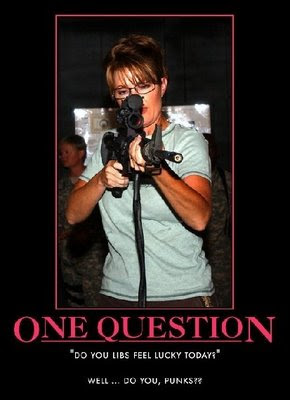 She already knows how to field dress a donkey. what she will do is skin that donkey alive without them ever feeling it then hang the carcass out to dry. then once that hide has dried and tanned she will use it to upholster her vp office chair. with that done, nobody will dare to call her views black or white.

Memories of a malicious attack! 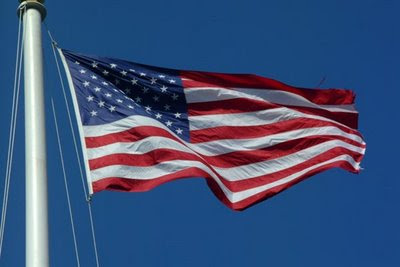 The attack just made me stronger then ever! I hope the “American” people feel and are the, same!

I would like to point out we have failed more of their asinine attacks! I will bet we will continue to stop them dead in their tracks! Many are enjoying life and the islamic extremists can’t do a damn thing about it! And never will!

WE IN THE USA WILL NOT ALLOW IT! WE ARE UNDER GOD WHERE THEYARE UNDER SATAN!

Our military has something for them if they try it again!
So if they over there, in the Middle East don’t care about their women and children. We do care about ours here in the USA! Those opposed can move over where they live then! That is war!

You can’t reason with a crazy ass CULT! They don’t care they want you dead!

God bless our troops!
Posted by dcat at 5:17 PM No comments:

Sarah Palin! She's Got the look!

There you have it!

Luckily, he has ABC News and George Stephanopoulos to jump in and correct him.

I don’t care what NBC had! YOU GOT THAT! BUCKO!

Fraudulent slip to me is truth!

Obama has so much shit going against him what is one more thing!

What a blogger had to say about Obama / ACORN

Why Obama's "Community Organizer" Days Are a Joke

Explaining the "community organizer" joke to the outraged Left

excerpt: [Obama, his presidential campaign gaining steam, had this to say about legendary Chicago organizer Saul Alinsky in The New Republic: "Sometimes the tendency in community organizing of the sort done by Alinsky was to downplay the power of words and of ideas when in fact ideas and words are pretty powerful. 'We hold these truths to be self-evident, all men are created equal.' Those are just words. 'I have a dream.' Just words."]

excerpt: [One of Obama's early mentors in the Alinsky method was Mike Kruglik, who had this to say to an Ryan Lizza of The New Republic, about Obama:

"He was a natural, the undisputed master of agitation, who could engage a room full of recruiting targets in a rapid-fire Socratic dialogue, nudging them to admit that they were not living up to their own standards. As with the panhandler, he could be aggressive and confrontational. With probing, sometimes personal questions, he would pinpoint the source of pain in their lives, tearing down their egos just enough before dangling a carrot of hope that they could make things better."]

excerpt:["Obama never met Alinsky personally; the latter died when Obama was a young boy. But Obama was trained by the Alinsky-founded Industrial Areas Foundation (IAF) in Chicago and worked for an affiliate of the Gamaliel Foundation, whose modus operandi for the creation of 'a more just and democratic society' is rooted firmly in the Alinsky method. As The Nation magazine puts it,

'Obama worked in the organizing tradition of Saul Alinsky, who made Chicago the birthplace of modern community organizing.…'

In fact, for several years Obama himself taught workshops on the Alinsky method.

'In 1985 [Obama] began a four-year stint as a community organizer in Chicago, working for an Alinskyite group called the Developing Communities Project. Later, he worked with ACORN and its offshoot Project Vote, both creations of the Alinsky network.']

excerpts:[And, according to what Obama wrote in his first autobiography, the man in question — Frank Marshall Davis — appears to have been Barack's own mentor, and even a father figure. Of course, since the Soviet Union itself no longer exists, it's an open question what it means practically to have been politically mentored by an official Communist. Ideologically, the implications are clearer.]

[It was, of course, an explicit tactic of the Communist party to stir up discontent among American blacks, with an eye toward using them as the leading edge of the revolution. To be sure, there was much to be discontented about, for black Americans, prior to the civil-rights revolution. To their credit, of course, most black Americans didn't buy the commie line — and showed more faith in the possibilities of democratic change than in radical politics, and the results on display in Moscow.]

excerpt:[However, through Frank Marshall Davis, Obama had an admitted relationship with someone who was publicly identified as a member of the Communist Party USA (CPUSA). The record shows that Obama was in Hawaii from 1971-1979, where, at some point in time, he developed a close relationship, almost like a son, with Davis, listening to his "poetry" and getting advice on his career path. But Obama, in his book, Dreams From My Father, refers to him repeatedly as just "Frank."]

ps: More Proof of Obama's Socialism. In 1996 he ran as member of New Party

[Obama won his State Senate seat as a member of the New Party, an extreme left wing group run by a former Jesse Jackson campaign manager. Its mind-blowing that Obama could have got to the top of the Democrat ticket without at one wise man screening him. Well the Dems made this bed, now they must live with these shocking truths about the type of communist-like changes Obama would bring to the America.]

[Some of these chapters — such as those in Chicago and Little Rock — had their main bases of support in the low-income community organizing group ACORN, along with some support from various labor unions (especially ACORN-allied locals of the Service Employees International Union).]

Their list of partners include ACORN, Code Pink and CAIR.

[Obama recently met with Code Pink's own Jodie Evans at a fundraiser last week. Code Pink is the group that sent over $600,000 to the terrorists that I was fighting while I was in Fallujah! They're standard response to this allegation is that the money went to the families of innocent Iraqis killed by our murderous Soldiers, but that's not the reality I witnessed.]

but what do "we the people" get to hear about the DEMS SMOKE & MIRRORS MESSIAH?? gah!!
Posted by dcat at 5:15 PM 5 comments:

Yeah I really do think they are working folks in power!

Oh and Obama said that women can’t do the job of VP and raise a family? Women are actually voting for this chauvinist pig! It really makes me think that ok they deserve sharia law! I on the other hand will fight it!

As the West Sleeps, Islamists Work on Establishing a Worldwide Islamic State 2

As the West Sleeps, Islamists Work on Establishing a Worldwide Islamic State 1

Muslims put up a $50,000 reward for the head of John McCains preacher, Pastor Rod Parsley.

The war in America against Christianity by Muslims has started in ernest...
Posted by dcat at 9:09 PM 2 comments:

Palin does have grit! Watch out DEMS!

A warning to the Democrats! 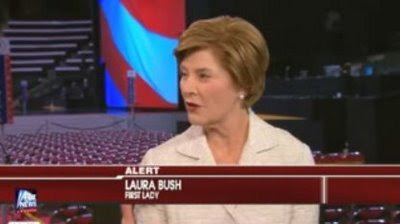 If the democrats are like the VP Obama picked they will be stepping into some serious shit of insert foot in mouth.

I’ll just sit back and watch the show. “Grin”