Insult Islam! Cover your ears and don't listen to 0!

Remember to Insult islam all you WANT! Thanks again Atlas Shrugs!
Posted by dcat at 9:24 PM No comments:

The Future: thank you Atlas Shrugs!

Obama care! Just don’t leave the top of the stairs without it!

I hope the lines are not all busy!

And the hat tip goes to bg!

I have been too pissed off to post anything! The world has gone mad! :p


Mohamed you candy ass! You can shut your mouth you piece of SHIT!

I protest against CAIR TOO!

WE WILL WIN THIS!

Census is not authorized Remember that!

You only tell them how many people live at your address! Nothing more!

Islam has a clouded agenda to some but not all!

WTF!!! Everybody that is sane has an agenda against the muslims! HELLO! It’s all clear to me!

911 Will never be reversed in a moral mans mind! WE WILL NEVER FORGET!

Today I heard about the Pentagon under attack! AGAIN!

And there is this BS: · The Constitution 'Open to Change'? - Obama judicial nominee called 'brilliant' even by critics, but his constitutional views are raising eyebrows • *Panel Approves Controversial Justice Dept. N...

I say: Leave the constitution alone!!!

“They have religious police over in the muslim countries!” So basically you have no rights if they deem you guilty on their grounds! You could be stoned for talking to the opposite sex for God’s sake! Meanwhile young girls get raped by men and that is ok for the men but the woman gets stoned to death! We don’t want this sick cult here!!!

Oh hell yeah they are all under a microscope and I can’t wait till Seattle gets the body scan! No one but no one will be exempt from going past one. Islamics will not fly I’ll wager! They will and have other methods and yes we do know right down to the surgical implants! Our good citizens have been briefed, so let this be a fact! WE ARE WATCHING AND READY TO TAKE ACTION!

Here is more BS coming from a name calling twisting facts kind of character called Jibril Hough. Take note that he isn’t working alone there are many like him out there! No one is whispering in my ear! I can see it!

Remember that they will drink with you while planning your demise! They remind me of Satan’s convincing ploys.

Here we have the latest on Jibril from an organization fighting to enlighten from ACT for America:

This is Why Islamists Name-Call

The WorldNetDaily story below captures how a Muslim leader in North Carolina “imploded” during a radio interview. 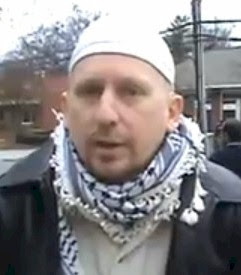 Hough’s implosion on the radio reveals why Islamists engage in such “attack the messenger” tactics. When challenged, they cannot deny the facts about radical Islam and its many tentacles into America. So they attack, hoping to divert attention from the truth they’re desperately trying to hide.

IT'S GONNA HAPPEN "O" You are going out on your ass!

That is our Wolverines!