Losing a good American to thugs

On June 1, 2009, Carlos Bledsoe, a convert to Islam who changed his name to Abdulhakim Mujahid Muhammad, shot and killed Army Pvt. William Long outside a Little Rock military recruiting center. Muhammad later wrote “This was a jihadi attack on infidel forces…” Americans for Peace and Tolerance recently completed production of a powerful and moving documentary about the forces at work raising jihad against America, and how two families lost their sons as a result. The Long family lost their son to jihad. The Bledsoe family lost their son to radical Islam. Giving into the enemy is not an option!
Posted by dcat at 8:32 PM No comments:

Restoring the Rule of Law

Muslim and Peace are not a good combo!

Letting thugs out!? For what target shooting? I'm ready!!! It's going to be a hell of a battle! This reality may it slap you into the light!

From someone that knows: Tia XXXXX 8:33pm May 7 My husband was actually good friends with the Navy Diver murdered on the 1985 TWA flight they were roommates at one point. We had part of his dress uniform Mike had borrowed from him b4 this flight we eventually donated it to the Seabee museum in Pt Hueneme, CA his last name was Steadham.

I went to school with one of the Marines that was blown up in the 1983 marine barracks. So tell me these Muslims are a peace loving people? Not. These people weren't strangers that were killed they were people we knew. Those seals that were shot down in the Helo that was a whole squad We knew them all it's Mikes unit they were from. Anyone want to ask me about Muslims I will tell you from experience! Sent from my iPad A lot of Americans have become so insulated from reality that they imagine that America can suffer defeat without any inconvenience to themselves.. Pause a moment, reflect back.These events are actual events from history.. They really happened!!! Do you remember?

2. In 1972 at the Munich Olympics, athletes were kidnapped and massacred by Muslim males.

3. In 1972 a Pan Am 747 was hijacked and eventually diverted to Cairo where a fuse was lit on final approach and it was blown up shortly after landing by Muslim males.

6. During the 1980's a number of Americans were kidnapped in Lebanon by Muslim males.

7. In 1983, the US Marine barracks in Beirut was blown up by Muslim males.

8. In 1985, the cruise ship Achille Lauro was hijacked and a 70 year old American passenger was murdered and thrown overboard in his wheelchair by Muslim males.

9. In 1985, TWA flight 847 was hijacked at Athens , and a US Navy diver trying to rescue passengers was murdered by Muslim males.

11. In 1993, the World Trade Center was bombed the first time by Muslim males.

12. In 1998, the US embassies in Kenya and Tanzania were bombed by Muslim males.

13. On 9/11/01, four airliners were hijacked; two were used as missiles to take down the World Trade Centers and of the remaining two, one crashed into the US Pentagon and the other was diverted and crashed by the passengers. Thousands of people were killed by Muslim males.

14. In 2002, the United States fought a war in Afghanistan against Muslim males.

15. In 2002, reporter Daniel Pearl was kidnapped and beheaded by--- you guessed it--- Muslim males. No, I really don't see a pattern here to justify profiling, do you? So, to ensure we Americans never offend anyone, particularly fanatics intent on killing us, airport security screeners will no longer be allowed to profile certain people... Absolutely No Profiling! They must conduct random searches of 80-year-old women, little kids, airline pilots with proper identification, secret agents who are members of the President's security detail, 85-year old Congressmen with metal hips, and Medal of Honor winner and former Governor Joe Foss, but leave Muslim Males alone lest they be guilty of profiling. Have the American People completely lost their Minds, or just their Power of Reason??? Let's send this to as many people as we can so that the Gloria Aldreds and other stupid attorneys along with Federal Justices that want to thwart common sense, feel ashamed of themselves -- if they have any such sense.As the writer of the award winning story 'Forrest Gump' so aptly put it, 'Stupid Is As Stupid Does' Each opportunity that you have to send it to a friend or media outlet...do it! Sent from my iPad

Yes and I will never forget!

For ALL the Jessica Mokdad Human Rights

The media would rather show how unfair it was not to let muslim women in rather then why Jessica Mokdad and other women were Honor killed! Watch:
Posted by dcat at 7:58 PM No comments:

What a bunch of thugs!!!  I hope the police shoot them dead!   How dare these thugs cause so much trouble to good people trying to go to work and provide for their family!  You’re not people, people you all are nothing but assholes and thugs!   Oh and illegal is illegal!  Go to a socialist country you commies and Marxist!  I for one am sick of your crap!  So are all the decent people and we have rights too!  Damn you all need to be deported because you are not Americans you’re a bunch of thugs!!!  You can wipe your ass with the literature and should be fined!


I think we should have every right to protest against obuma too but gee our rights are being taken and so is the American dream because of the whinny little socialist Marxist commie have not morons!  These left loon losers have rights?  The left loons seem to be trying to run the show!  Not for long!  I’m sure this is making people see that the left are really disgusting creatures and won’t have nothing to do with them!


My prayers go out to the businesses and the police God please look after them and our country rid us of these parasites.
Just disgusting:  Seattle May Day protests turn violent 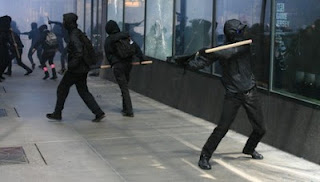