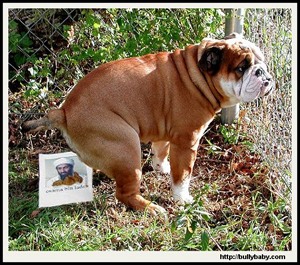 I want to view the corps for my satisfaction, this is what happens to thugs! Also to piss the rest of them off enough to come out screaming so we know who they are and do the same to them!!!

I'm really getting annoyed with the tip toeing around their messed up little cult minds!!! I really have had enough of the crap Indigo and I know you feel the same.

Oh and every picture tells the story don't it!Click here

As an American paying taxes I want the product!

Americans that were stressed that day need that! I had a family member that could have very well been flying that plane that day!!!

Hmmm you sound racist to me.

Never mind the "fact" it takes years to have the opportune moment!

It was a very complex mission! Thank you Bush and the Navy Seals!

Don’t forget Pakistan was harboring him! Some friends they are! NOT!

Oh and while I am on a roll here zero had a muslim funeral for him. I’m hoping that they did wash his body! With Navy piss! before dumping his vile corps into the drink!