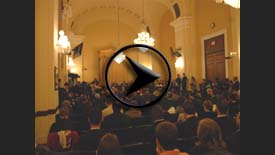 I'm not backing down either!!!

Read what I got from ACT:

Make sure you scroll down to the end to read what he says about the New York Times.


“Good morning. Today, we hold the third in a series of hearings on radicalization in the Muslim-American community.

Our focus is the result of a lengthy investigation the Committee has conducted into the threat the U.S. homeland faces from al-Shabaab, the Somalia affiliate of Osama bin Laden’s al-Qaeda and Anwar al-Aulaqi’s al-Qaeda in the Arabian Peninsula (AQAP).

The Committee has been briefed by intelligence agencies and we have interviewed dozens of experts on al-Shabaab.

I welcome our distinguished panel of witnesses. They have some of the most extensive insights into the problems uncovered by our Committee’s investigation and we are grateful they are sharing their knowledge.

You will hear how al-Shabaab, who bin Laden called “One of the most important armies” of Islam, is engaged in an ongoing, successful effort to recruit and radicalize dozens of Muslim-American jihadis, who pose a direct threat to the U.S.

Some argue that al-Shabaab is only a Somali problem, and that the group will never strike outside of the Horn of Africa region.

That kind of thinking is a glaring example of what the 9/11 Commission called a failure of imagination.

With al-Shabaab’s large cadre of American jihadis and unquestionable ties to al-Qaeda, particularly its alliance with AQAP, we must face the reality that al-Shabaab is a growing threat to our homeland.

Our investigation into this threat has led to alarming findings: Notably, that al-Shabaab has successfully recruited and radicalized more than 40 Muslim-Americans and 20 Canadians, who have joined the terror group inside Somalia.

Of those, at least 15 Americans and 3 Canadians are believed to have been killed fighting with al-Shabaab, the Committee has learned.

Not al-Qaeda, nor any of its other affiliates, have come close to drawing so many Muslim-Americans and Westerners to jihad.

Three Muslim-Americans became suicide bombers, such as Shirwa Ahmed from Minneapolis -- the first confirmed American suicide bomber in our history.

There also are radicalized converts like al-Shabaab commander Omar Hammami who was raised a Baptist in Alabama, and who has repeatedly threatened the U.S. homeland.

Three American al-Shabaab fighters have been arrested after returning home and one was collared in the Netherlands.

Other radicalized Muslims have been arrested in the U.S. and Canada before they reached Somalia, which is now much easier to get to for jihad than Afghanistan, Iraq, Pakistan or Yemen.

But as many as two-dozen Muslim-Americans with al-Shabaab -- who in many cases were trained by top al-Qaeda leaders -- remain unaccounted for.

The Committee found that al-Shabaab-related federal prosecutions for funding, recruiting and attempting to join al-Shabaab are the largest number and most significant upward trend in homegrown terror cases filed by the Justice Department over the past two years.

Al-Shabaab is recruiting inside American mosques in Somali communities like Minneapolis and San Diego, according to the Justice Department.

This month, an al-Shabaab recruiter pleaded guilty to recruiting a large group of Muslims in Minneapolis, “At mosques,” and without any known protest by mosque leaders. A top al-Shabaab leader in Somalia supervised this recruiting.
One Minnesotan recruited was suicide bomber Shirwa Ahmed whose 2008 attack in northern Somalia sent a shockwave of alarm through U.S. homeland security agencies, because of its implications.

Another would-be bomber from Minneapolis was shot and killed in Mogadishu by peacekeeping troops on May 30, moments before detonating his suicide vest.

When one cleric spoke out against al-Shabaab inside the Minneapolis mosque where many of the missing young Somali-American men had once worshipped, he was physically assaulted, according to police.
For those still skeptical that there are still jihadi sympathizers inside that community, it’s worth mentioning that the Committee learned of the mosque assault when an audiotape of the incident was posted on overseas jihadi Internet forums before authorities in Minneapolis even knew about the incident.

There is an enormous amount of travel by Somali-Americans between U.S. cities and East Africa. While most of this travel is legitimate senior U.S. counterterror officials have told the Committee they are very concerned about individuals they have not identified who have fallen in with al-Shabaab during trips to Somalia, who could return to the U.S. undetected.

They fear an al-Shabaab fighter operating under law enforcement’s radar – someone like a Zazi, a Shahzad, an Abdulmutallab – may attempt an attack here.

It is deeply troubling that from the very beginning, the Muslim-Americans in Somalia were trained by top al-Qaeda operatives, including several who were tied to Yemen’s al-Qaeda in the Arabian Peninsula (AQAP), which is now generally considered our biggest homeland threat.

Al-Shabaab operative Ahmed Abdulkadir Warsame was charged this month for doing weapons deals and explosives training with AQAP in Yemen, and to, “Provide AQAP with material support including... personnel.”

Al-Shabaab has long harbored top al-Qaeda leaders, such as the mastermind of the 1998 U.S. embassy bombings in East Africa, who was gunned down this month in Somalia after a 13-year manhunt.

Al-Shabaab has paraded in Somalia in support of AQAP and sent fighters to battle the weakened Yemeni government this year -- as well as flying the battle flag of al-Qaeda-in-IRAQ.

Finally, an al-Shabaab bombing in neighboring Uganda one year ago that targeted Westerners killed 74 people including one American.

President Obama’s Director of National Intelligence, James Clapper, has said the Administration remains, quote, “Vigilant that al-Shabaab may expand its focus from fighting to control Somalia to plotting to attack the U.S. homeland.”

That convinced me of the necessity to launch a careful examination of that threat.

Dozens of experts the Committee interviewed agreed this threat is real, and that al-Shabaab leaders’ public calls for attacks against America -- including in retaliation for killing bin Laden -- must be taken seriously.

With a large group of Muslim-Americans willing to die as “martyrs,” and a strong operational partnership with al-Qaeda leaders in Pakistan and in Yemen, al-Shabaab now has more capability than ever to strike the U.S. homeland.

We look forwarding to hearing more about the rising al-Shabaab threat from our exceptional witnesses, as well as the Minority’s distinguished witness.

Finally, I note that certain elements of the politically correct media—most egregiously the vacuous ideologues at the New York Times—are shamelessly attempting to exploit the horrific tragedy in Norway to cause me to refocus these hearings away from Muslim-American radicalization.

If they had even a semblance of intellectual honesty the Times and the others would know and admit that there is no equivalency in the threat to our homeland from a deranged gunman and the international terror apparatus of al-Qaeda and its affiliates who are recruiting people in this country and have murdered thousands of Americans in their jihad attacks.
Let me make this clear to the New York Times and their acolytes in the politically correct, moral equivalency media--I will not back down from holding these hearings. I will continue to hold these hearings so long as I am the Chairman of this Committee.

Apart from all the strategic and moral reasons why these hearings are vital to our security, they are liberating and empowering to the many Muslim-Americans who have been intimidated by leaders in their own communities and are now able to come forward.

I also owe it to all the friends, neighbors, and constituents I lost on September 11th. I will not back down.”
Posted by dcat at 5:25 PM

And While Some Focus on "Islamic Reformation"...

Another Ft Hood Attack Plot by Muslim US Service Member.

RG,
The gun owner was vigilant! See something say something! Pisslamics really do need to be under a microscope!

Aljazeera Gave One of the Ft Hood Plotters Air Time to put down the US Military while in uniform.

What else would one expect from hate filled aljazeera!

aljazeera sucks! They like all the left loon journalists are the yellow journalists!

We need to be appreciative of Mr. King’s past and future efforts in the U.S. Congress on identifying and addressing radical Islam within the U.S. Contrary to what some Members of the Committee claim, he never has and never will focus on the peaceful Muslims living in America. This is not about them and, frankly, these hearings will benefit them. These discussions are about identifying and immobilizing those individuals who follow an ideology that is contrary and dangerous to the freedoms afforded by our U.S. Constitution—those who strive to do harm to our nation and our citizens.

Finally, we need to let Chairman King and all other Members of Congress who continue to speak out about this issue know that a grateful nation—certainly including the 170,000 members of ACT! for America—is behind them 100 percent.

As for those Members of Congress who do not take this seriously, who seem intent only on making a mockery of these hearings, they need to hear from their constituents too. They need to be told that they took an oath to defend the Constitution and they need to start taking these discussions about Islamic radicalization seriously.